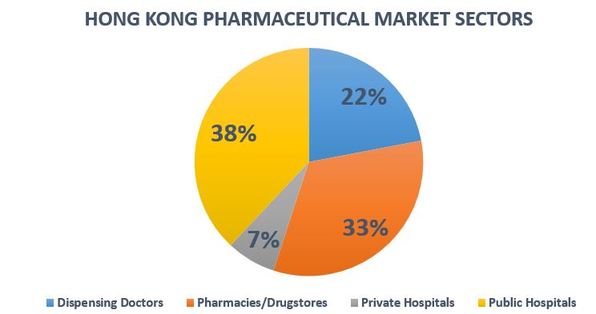 ”Dispensing doctors” and pharmacies are two of our major sectors, accounting for 22% and 33% of the market respectively. There are approximately 10,000 registered doctors in Hong Kong, with around half the number in private practice. Private practitioners are able to dispense drugs according to Hong Kong laws, with a single fee normally charged for both consultation and medication. With regards to the pharmacy and drugstore sector, there are roughly 2000 that are authorized and listed sellers of prescriptive, over-the-counter and toiletry items. Public hospitals form the largest single sector of the market with a 38% market share. The majority of the sector’s expenditure are through tenders.

Hong Kong is a free port with no import duties on pharmaceuticals. On the other hand, local pharmaceutical manufacturers are facing more stringent regulatory restrictions, as well as rising cost factors. Therefore, imported drugs are likely to continue dominating the market with its current market share at over 80%. Despite a humble population size, the pharmaceutical import market of over US$1 billion per annum is comparable to markets in countries with larger populations.